A picture paints a thousand words…

In our early days of married life each family photograph was lovingly taken with camera and film, delivered to the chemist for development and the finished prints picked up a week later. Sometimes, I’d use a special envelope for sending films off for processing to some far flung film developers before, hopefully, having them delivered back through the door.

I can still remember the excitement of collecting developed pictures from the chemist; hoping the assistants hadn’t had a sneak peak at them, then hiding round the corner to scan the latest pictorial record of our life. There were always some photographs that hadn’t quite turned out as expected; blurrily out of focus, too bright or too dark, with maybe a fat thumb or skinny finger covering the lens and captured for all to see.

I treasured these photographs. I used to spread them out on the living room floor and gaze at them for hours. Then once I’d had my fill of imprinting them on my memory and showing them off I’d proudly stick them into albums. As the years passed the collection of photographs and albums grew. As further years passed I became lax about sticking the photos in albums; instead tossing the packets of prints into an old apple box kept for that purpose.

With the arrival of digital cameras we didn’t have to be so careful in our photo taking. Snap, snap, snap at each and every opportunity with no fears about the costs of film or processing. Transfer to the computer, delete those you don’t like, crop, adjust and save those you do. In the early days proudly printing them out on the home printer, then later, just burn them to disc and forget about the printing.

Stacks and stacks of discs recording our life, sanitised, edited and suitable for viewing by all. Emailed to friends and family, posted on Facebook and shared with the world, backed up then slipped into little plastic wallets… and largely forgotten. Far too many to commit to memory – far too many marking insignificant and truly mundane moments.

Recently, while sorting through some papers I came across a photograph. It showed three small boys in swimming trunks and a middle aged man also in trunks. They were all standing in a river, knee deep in water and holding hands. It’s a glorious summer day and while you can’t fully see their faces it’s clear they’re laughing. If you look closely you can see fishing rods, towels, a picnic and two cans of beer on the riverbank. You can also see my toes captured while sitting on the grass and taking the photograph.

I’d nearly forgotten that day 25 years ago; not quite but nearly. Three young boys and their granddad fishing and swimming, the family holiday, the nettles, the trek to the swimming spot and the digging for worms. I remember a lot more but it’s not for sharing. It’s for savouring in quiet, private moments when I need to count my blessings – something I do frequently.

Apart from the wonderful memories the photograph invoked it also prompted another feeling. I’m now increasingly convinced of the need to revert to actually printing my digital photographs, or of having them printed for me. I don’t want them to be forgotten or consigned to shiny metal discs and stuffed into brittle plastic envelopes. I’d quite like my children and grandchildren to come across them and think, ‘I remember that.’ 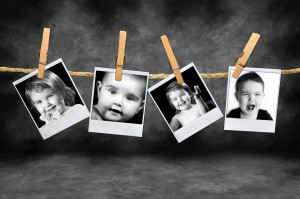