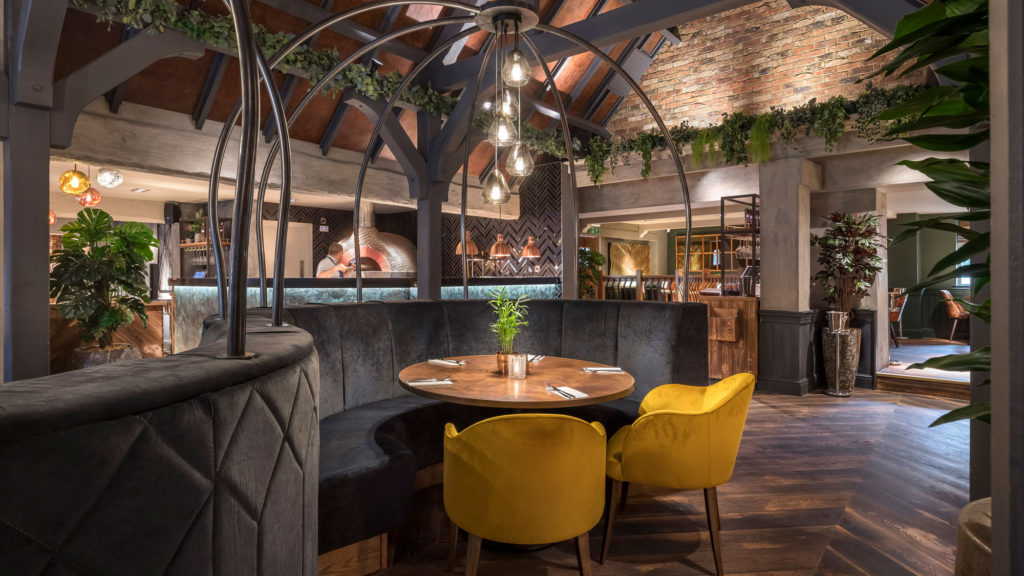 The Red House in Lilleshall was taken over earlier this year by the Parogon Group who already have six other very successful venues, which include The Seven Stars at Brockton, The Swan with Two Necks, The Wayfarer, The Orange Tree, Blockhouse at The Sheet Anchor and The Boars Head. After having invested £950k on refurbishing The Red House and creating over 70 new jobs in the area, the restaurant opened its doors on the 10th September 2019.
We were truly amazed when we entered The Red House, you wouldn’t recognise it was the same place at all – it has had a total transformation with an amazing unique décor, giving it a whole new life with a modern classy look. Every section of the restaurant has its own style and design and includes cosy booths, feature walls, luxury fabrics, contemporary art and industrial lighting
The outside area has also been transformed with a new secret garden with fantastic views and includes a mix of different seating areas, including a fire pit with chairs around it – perfect to sit around on a summer evening.
It was very busy on the night we arrived and we were shown straight through to our table where our waiter promptly arrived to introduce himself and give us some menus.
There is a wide selection of dishes on the menu and they cater for all tastes. The menu is split into sections with starters, main dishes, steaks, burgers, skewers, pizzas and salads – so plenty of choice. There is also a menu with vegan and vegetarian dishes and a menu with non-gluten dishes. A separate children’s menu has a good choice of meals for them too. A range of sandwiches are available at lunchtimes.
The pizzas are cooked in an impressive large pizza oven situated inside the restaurant – so you can watch your pizza being made.
After a few minutes of browsing the menu we ordered our food, I decided on one of the vegetarian options which was the Fried Tortilla Cones (£4.95) and Nik opted for one of the fish dishes, the Crispy Whitebait (£6.45).
My slightly crispy tortilla cones were coated in white and black sesame seeds and were filled with mixed beans and peppers in a delicious sauce with just a nice chilli kick, the crunchy fried jalapeños that were sprinkled on top of the cones also added a little heat to the dish.
Nik’s whitebait was served with a wasabi tartar sauce. The delicate whole fish were full of flavour and had a wonderful golden crisp shell, dipping them in the wasabi tartare sauce made the perfect combination.
For mains I chose the Argentinian Style Beef Skewers (£15.95) and Nik ordered the Beef en Croute (£17.95).
My skewers were delicious, the beef was tender and had a tasty bbq grill flavour, the chimichanga sauce added lots of flavour, there were also chunks of onions, peppers and courgette and the creamy garlic mayonnaise dip worked perfectly with this dish. It was served with salsa potatoes which were the ideal accompaniment to this dish, they were mixed with finely chopped peppers and onions.
Nik’s beef en croute was served with braised red cabbage, dauphinoise potatoes, baby carrots and a merlot wine sauce. The beef fillet was perfectly cooked pink, as requested. The beautifully tender fillet was topped with a delicate layer of mushroom duxelles and wrapped in a light filo pastry. The creamy dauphinoise potatoes, sweet red cabbage, baby carrots and a tasty rich jus completed this hearty French classic dish – fabulous!
It’s not something we usually do, but we decided to share a dessert, well it was a sharing dessert! We ordered the Chocolate Fondue Sharer (£14.95), as recommend by our waiter. You can also make it boozy chocolate for an extra £3 – choose from Rum, Baileys, Kirsch, Orange Liqueur or Amaretto – we added in a shot of orange liqueur.
There was quite a wow factor when the dish arrived as it was served on a large platter with dry ice rising from it. It was served on banana leaves with honeycomb, marshmallows, meringue, strawberries, waffles, pineapple and banana. The warm melted chocolate was in the centre of the dish, the orange liqueur added a lovely flavour to the chocolate. The large chunks of marshmallows were the softest most delicious marshmallow I have ever had, so light and fluffy. The honeycomb was amazing, melt in the mouth with lovely gooey sticky bits. The chunks of waffle were light and crispy – a great end to our meal.
The Sunday Lunch menu is available all day on a Sunday alongside all the other menus with 1 course at £13.95, 2 courses £18.95 and 3 courses £23.95. Breakfast is also available on weekends between 9am till 11:30am with a wide selection to choose from starting from just £1.95.
The only thing that remains from the former restaurant is the name, the rest is totally transformed – putting themselves well and truly at the top of the places to go to in Telford – but don’t just take our word for it – go and try it for yourself, you won’t be disappointed!
Reviewed by Fleur & Nik Abel