We had heard that The Plough Inn, situated in Shifnal, had recently opened, and as we often hear many stories of local pub closures it was great to discover that a new one had opened.  The former owners of the Wheatsheaf Inn in Shifnal had decided to put the former pub back to its original identity. The Plough Inn has hundreds of years of history, and in the last decade was converted into Darcy’s restaurant. Locals welcomed the return of The Plough!

Owners Lana and Peter Giles, daughter Claire and son-in-law James, believe in embracing local art, poetry, dance, music and creating a typical village atmosphere, which they have more than achieved. Considering they only opened in December 2011 they have already achieved so much!

Redecorated throughout and ongoing developments to the beer garden at the rear are already well underway, The Plough is back to its traditional style packed with character, with a reputation very quickly having been built for providing quality food at reasonable prices, including the “two mains for £10” offer, available on all main meals 7 days a week.

After a very busy Mothers day weekend, we decided to visit on a Monday evening. On arrival, we had a very warm welcome from the bar tender who promptly took us to our table positioned in the window – a great setting to see the entire pub and of course to see what is happening outside!

The pub has a very traditional feel to it, with original beams and features. We were told that the pub will very soon be displaying art which will add even more character to the grade 2 listed pub. The menu on offer is of a traditional pub style with a large selection of pies, breakfasts, burgers, vegetarian, fish and roast meat options, with all main meals at two for £10!

For starters my wife Ann chose the breaded garlic mushrooms (£3.75). These were presented with a creamy garlic mayonnaise dip and a seasonal salad garnish. I opted for the cheesy garlic bread (£3.75) which was also served with a salad garnish. Ann’s mushrooms were very tasty and the creamy garlic mayonnaise dip was a success, adding plenty of flavour to the dish. My garlic bread was loaded with melted mature cheese, (four slices in total!) was equally as good, in fact, we shared each other’s starters!

When the mains arrived, they were served on large plates and they appeared to be very generous portions!  Ann’s cheese and onion omelette was cooked to perfection, and presented well. My gammon was full of flavour and filled half the plate! I could understand why the gammon was the favourite dish!

The desserts on offer include several flavours of homemade sponge puddings – it seemed rude not to try them! Ann chose the cherry and coconut sponge (£3.75) and I chose the more traditional treacle sponge pudding (£3.75). We chose to enjoy our puddings with custard, but ice cream is also available. When the desserts arrived I knew it would be a challenge for Ann, a very large portion! Both dishes were surprisingly light and fluffy as you would normally expect a sponge pudding to be heavy. I managed to eat all of mine of course; however Ann did struggle to finish hers!

I feel that The Plough Inn will be a success by offering traditional pub food at an affordable price, £10 for two meals is exceptional value, especially as they run this offer 7 days a week including Sunday roasts!

For all of the real ale fans out there, you must pay a visit to The Plough; there are 8 cask ales available at all times with a minimum of 30 in stock, and also three draught ciders, two of which are traditional cask ciders. CAMRA members can also benefit with 10p off a pint of real ale. I did sample a couple and I was very impressed!

Lana, Peter and the family have worked hard to embrace the arts, with their live open mic music night on a Thursday, art exhibitions, quiz night on Tuesdays, book swap, horse racing events and much more, creating a real village atmosphere.

It was great to see a new pub venture making a success of it, by being a family business they obviously share the passion of the business and have great plans for the future. 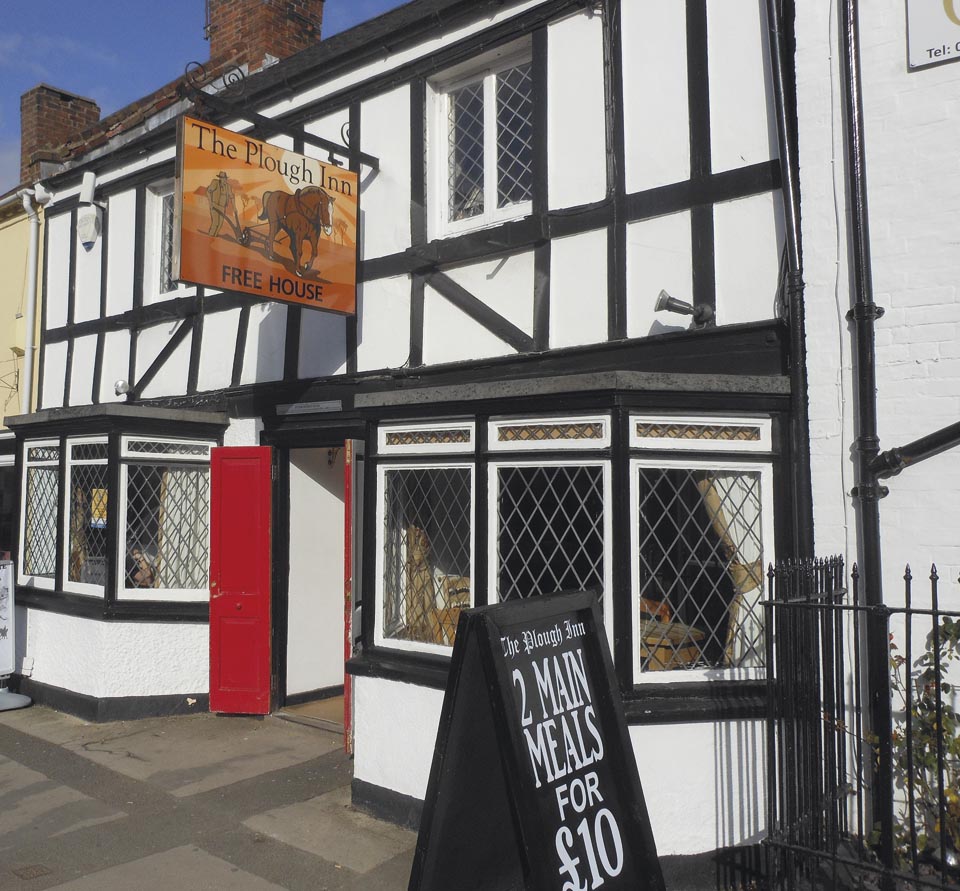